Thanks to a superb catch-up in the final quarter, the Kansas City Chiefs have finally won the almost lost Super Bowl LIV. Chief quarterback Patrick Mahomes had made some serious mistakes against the San Francicso 49ers, but then made a dream comeback.

The 31:20 (7:3, 3:7, 0:10, 21:0) for the Chiefs did not adequately reflect the drama at the end of the game. Until shortly before the end everything was still open on Sunday (02.02.2020/local time), the 49ers had started the last quarter with a ten-point lead. Mahomes seemed nervously on the ground, but with the courage of desperation he turned the game around at the end. 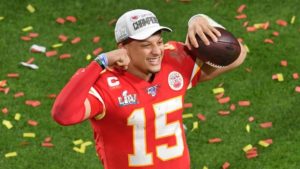 His opponent Jimmy Garoppolo showed an outstanding game for a long time, but in the decisive phase nothing more came from him. The German’s dream remained unfulfilled in the final: 49ers special team member Mark Nzeocha saw Kansas City win the title again after half a century.

Mahomes runs himself, Garoppolo with false start
From the beginning: The 49ers had provided the first points of the game. Kicker Robbie Gould scored from 38 yards away in 8:02 minutes in the first quarter to take a 3-0 lead via field goal. Both defensive lines dominated the first quarter, but 31 seconds from the end, the first touchdown was a commanding one: Chiefs-Quarterback Mahomes faked a pass just before the opposing end zone, fooled two defenders and finally ran over the line himself with the egg: 7-3 for Kansas City after kicker Harrison Butker converted the PAT (point after touchdown).

Mahomes’s opponent came into the game much worse at first. In an attempt to close the gap, 49ers quarterback Garoppolo threw the ball into the arms of chief defender Bashaud Breeland under pressure, and the first interception of the evening put Kansas City back in possession. Harrison Butker then scored a field goal from 31 yards to make it 10-3. 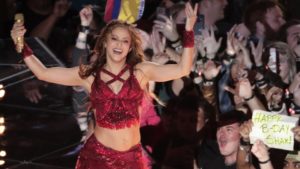 But slowly Garoppolo got going. Again and again he changed his starting positions, so that it was difficult for the Chiefs Defence to adjust to his game. Just before half-time he had distributed nine incoming passes to six different recipients. This also resulted in the equalizer: Nobody had expected Kyle Juszczyk to pass to him – touchdown plus an extra point from Gould at 10:10, five minutes and five seconds were still on the clock.

And now Garoppolo was running really hot. A few seconds before the end of the second quarter, the quarterback threw a superb pass to George Kittle just before the end zone – it would have been a great chance to even take a lead into the break. But the referees objected and threw the yellow flag because Kittle had allegedly kept a defender away a little too intensively before his spectacular catch – a highly controversial call.

Mark Nzeocha immediately challenged
At the beginning of the third quarter the German Mark Nzeocha was also challenged. In the 49ers’ kick-off return team, he helped to ensure that the Chiefs had to start their first attack attempt from way back – still behind their own 20-yard line. At the end of the drive there was only a field goal from San Francisco, which Gould converted from 42 yards to a 13-10 victory.

Now the momentum tilted to the 49ers. Mahomes, who hadn’t thrown an interception in the entire playoffs, allowed himself this interruption in the Super Bowl of all places: He wanted to force it too much, maybe because he had lost the ball shortly before, but had retrieved it himself – and threw it directly into the arms of Fred Warner.

Ten points lead for the first time
San Francisco promptly made use of the resulting field advantage: Garappolo, who by then had become a superb player (at that time he had 17 complete passes out of 20, twelve of them in a row), initially sought Juszczyk again, but he was stopped one yard before the end zone. Raheem Mostert by touchdown (plus PAT from Gould) finished 20:10 – for the first time a team was leading with ten points.

Mahomes was challenged – and failed again under the constant pressure of the outstanding 49ers defence. Three minutes had been played in the final quarter when he, once again poorly protected by his O-line, threw a pass into the back of his teammate Tyreek Hill. Tarvarius Moore grabbed the egg for the next interception – and the Niners cheered and posed for the photographers as if they had already won the title.

But once again the turnaround 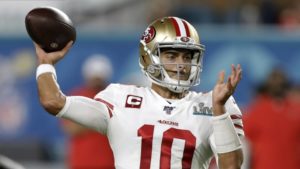 But Mahomes fought, tried everything and came back again: With a very long pass over 50 yards into the arms of Hill he provided the chance for a touchdown, and 6:13 minutes before the end Mahomes’ pass to Travis Kelce including extra point brought the 17:20 – suddenly there was high tension again!

Mahomes was subsequently overwhelmed: “It is such an honour to play for a team that never gives up. That’s what makes us what we are.” He was then presented with the trophy for Most Valuable Player (MVP). An embarrassment went to the US president of all people at his congratulations.

Donald Trump showed geographical weaknesses in his message to the new Super Bowl champion Kansas City Chiefs. “You’ve done a great job representing the state of Kansas,” Trump wrote on Twitter shortly after the Chiefs’ final win. But Kansas City is in Missouri. The president quickly deleted the tweet and sent a corrected version, but by then it was too late. The original announcement had long since made the rounds on the Internet.